On all gift vouchers

Not the right gift? No problem 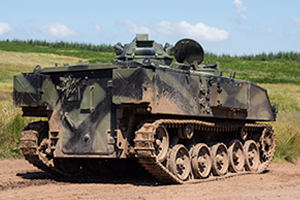 Understandably tank driving takes place in a relatively remote location so, as we meandered through the beautiful Scottish hillsides, we paid close attention to the driving directions!

Upon arrival at the activity centre, we were welcomed by a glimpse of the 18 ton APC 432 that we would, very imminently, be in control of (gulp). Once parked up, we were greeted by the very friendly ‘Tank Commander’ and led indoors to be briefed and to change into overalls, helmets and ear defenders. There we met the other experience goers who would be joining us and then we were ready to jump into the back of the tank and start our experience! 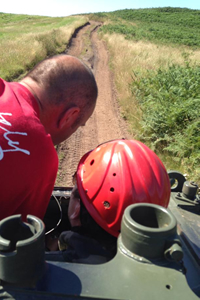 and a passenger) excitedly hopped in. Having been nominated to take the helm first, the others got seated in the crew compartment whilst I manoeuvred my way into the driving seat.

Driving a tank is very different to driving a car as you steer using levers! I put the tank in to gear, released the breaks and was on my way. For the first 100 metres or so, I tentatively inched around the track, but with the commanders encouraging words, I lost all trepidation and found myself confidently navigating around the course for a couple of laps; through obstacles, over and down steep inclines – it was awesome! 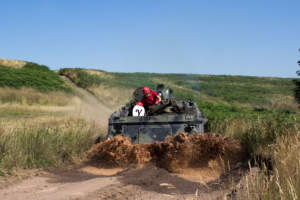 After the exhilaration of driving, the fun was not over as it was my turn to be a passenger! In the crew compartment, the roar of the engine could be heard as well as felt and, as the tank took off with next driver at the ‘wheel’, I knew that I was in for a bumpy ride! As passengers, we took it in turns to sit on top of the tank which was a great opportunity to take photos (cameras are a MUST for this experience) I was able to capture the immensely beautiful surrounding landscape as well as a few action shots of the tank in motion.

After the experience we were welcomed indoors with refreshments and received certificates for the day, we said goodbyes to our fellow ‘trainee tank commanders’ and headed home – going back in the more traditional 4 wheel mode of transport was a little disappointing after having driven a tank!

Take the helm of an ex-military tank for a drive across taxing terrain.