On all gift vouchers

Not the right gift? No problem

On an early morning in April, I made my way to the Ingliston race circuit at the Royal Highland Centre to get ready for my supercar driving experience! Off the bus and walking up the drive into the estate, I could hear the screeching of the tyres and see the cars going round the track. I made my way over to the sign-in centre where after checking in, I was directed to the briefing room. During the brief, the choice of cars was explained in great detail as well as safety information for the day. At the end, I got to choose which cars I wanted to drive and after great deliberation, I selected the Audi R8 V10, the Nissan GTR, the Lamborghini Gallardo and the stunning Ferrari 458! 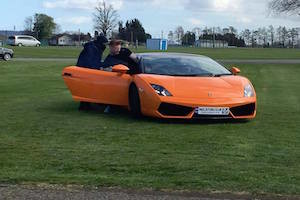 After Choosing the cars, everyone then headed down towards the driver’s area to get started and you could feel the buzz of excitement as we all waited to drive our chosen cars! Firstly, I joined the queue to drive the Audi R8. After a short wait, I headed over to the car where the instructor greeted me. After adjusting the car to my height and a brief explanation of how to drive the car properly (I’d never driven flappy paddle gears before), we were off! The R8 was unbelievable and with the instructor advising when to shift gears, hit the brakes and turn into corners properly I was able to get around the track faster than I could have imagined. It was an incredible feeling!

Next, I joined the queue for the Nissan GTR (one of my favourite cars since I was a child). Similar introduction to the R8, but the GTR gear pedals didn’t turn with the steering wheel, which I actually preferred. The GTR was a completely different driving experience to the R8. I don’t know if it’s because my confidence around the track was higher or if I found the different style of driving better or a combination of the two, but the GTR was glued to the track as I hammered round corners at around 50mph (this feels faster than it sounds!) 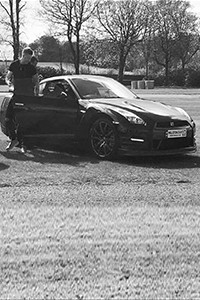 After the astounding performance of the GTR, I took a break to get something to eat and drink as the weather was nice. I watched the supercars around the track as I ate, itching to get back out on the track. I couldn’t wait any longer so I joined the line to drive the Lamborghini Gallardo. This car looks ferocious so I was more nervous than with the other two. As I got in, the instructor introduced himself and assured me that he would get me round the track as quickly (and safely) as possible.

There was a pause for the photographer at the track to take some photos before we pulled out onto the first stretch of road. Usually, I would keep the accelerator half way down as each car is unbelievably powerful, but the instructor insisted I put my foot down. This Lamborghini took off like nothing I have ever felt before. Roaring down the straight, I was advised not to hit the brake at the slight corner, but instead, pull off the accelerator – which I did. Similar to the GTR, the Lamborghini stuck to the track as I took the 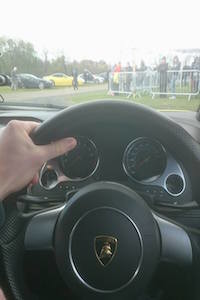 Walking up to the 458 queue, I was excited to see how this hypercar compared to the three supercars I had just driven around the track. There were only three people in the line at the time, but you could feel the excitement radiating from us as we waited to drive this amazing car.

When it was my turn I walked over to the car to discover it looks much bigger in person. The sun was out and the instructor dropped the roof to make the car look more fierce. Again, I received my introduction to the car and was off round the track. As I came up to the first straight, my heart pounding, I put my foot to the floor. The direct fuel injected, 4.5L, V8 engine kicked in and I was thrown back in my seat. 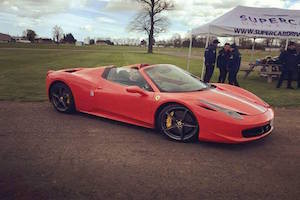 The only way I can describe driving this 458 around the track is what I imagine driving a spaceship is like…the response I had from the pedal was unreal. This Ferrari made all the other cars seem standard. I would highly recommend trying out one of the hypercars if you get a chance to experience this gift!

Good food, great weather and watching/driving supercars race around a track all morning – this is a great experience for anyone who loves their cars or just looking for a thrilling day out!